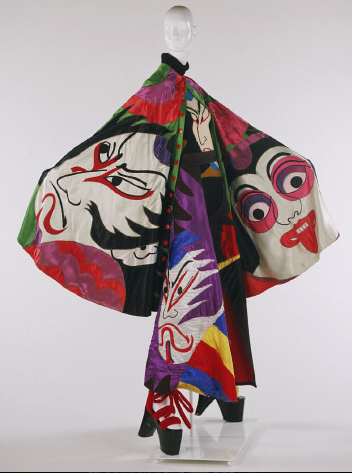 The fashion world continues to mourn the death of renowned fashion designer Kansai Yamamoto. Born in 1944 in Yokohama, Yamamoto died aged 76 of acute myeloid leukaemia. He is survived by his daughter, Mirai, who confirmed the news on Instagram with a post that told of her father’s peaceful passing surrounded by loved ones.

The designer is widely remembered as an icon in the fashion industry for his eclectic, gender-defying aesthetics that were far ahead of their time. His sculptural garments were inspired by the concept of basura, translated as flamboyance or excess. The distinctiveness of his designs earned Yamamoto the life-changing opportunity to exhibit his “womenswear” collection in London, UK, in 1971.

From that point onwards, Yamamoto caught the attention of a number of high profile celebrities. Particularly that of singer David Bowie, who struck up a relationship with Yamamoto and continued to wear exclusive pieces throughout his career. This collaborative friendship was brilliantly controversial, and continues to inspire designers to this day, including John Paul Gaultier and Raf Simons.

Toward the end of his life, Yamamoto founded his legacy, the Nippon Genki Project. It harnesses the designer’s relentless positivity and champions young designers. Kansai Yamamoto will be memorialised through his contributions to fashion—past, present and future.

Shannon is our Fashion and Beauty Editor. She has just graduated from Central Saint Martins in London, UK and currently lives in Liverpool. She will be moving to Japan to work as an Assistant Language Teacher as soon as the borders reopen!