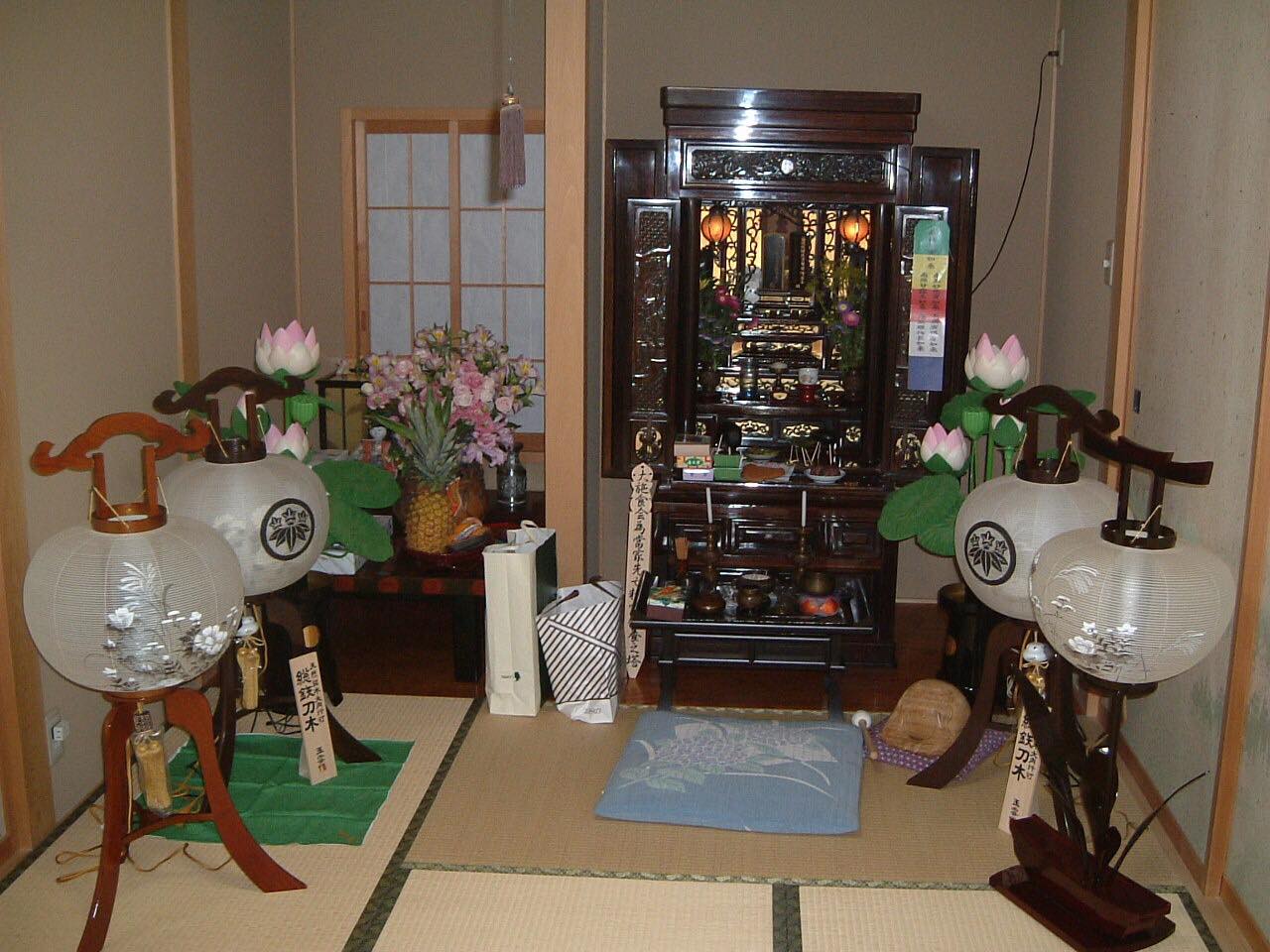 Japanese people have been celebrating Obon for more than 500 years. The origin of this Buddhist festival comes from the story of Maha Maudgalyayana (aka Mokuren), a disciple of Buddha who had the powers to see the spirit of his mother. He saw that she had descended into the Realm of Hungry Ghosts where she suffered. “Hungry ghosts” refer to spirits that have an insatiable hunger for something and thus, cannot rest.

Buddha told Mokuren to make offerings to the Buddhist monks, who had just returned from their summer retreat. So in the 7th month on the 15th day of the lunar calendar, Mokuren did as Buddha suggested, and his mother was freed from the realm, ending her suffering. Mokuren danced with joy, inspiring the now celebrated Bon dance. And thus, Obon came to be a holiday for releasing ancestors from the pain of being “hungry ghosts.”

Today, families get together to celebrate and honor their ancestors as they welcome the visiting spirits of their passed loved ones and ancestors. It is a time of reunion for families, whether that be in their hometown or traveling somewhere together. They’ll visit and wash the family gravestones, prepare offerings for the family altar or local temple, and dance and sing for their ancestors. When you see the iconic paper lanterns being hung to guide and light the way for the spirits, you know Obon has begun in Japan.

During Obon in Nagano, the traditional daily rituals go as follows. First, families go to their ancestors’ graves to pray on the 13th of August. Some families also practice the old, less common tradition of carrying their ancestors home with them by placing their hands behind their backs like they’re piggybacking someone. On the same day, families in Matsumoto and the surrounding areas burn kanba, a type of Japanese birch tree, outside their house to welcome the spirits of departed family members into the house. The act of burning kanba and other materials such as wara, a type of straw, outside the home is called mukaebi or “welcoming fires.” Other families in Nagano burn other types of wood or straw depending on the region.

Families also place offerings such as ohagi, a sweet similar to dango with an azuki bean covering and rice inside, and edamame, around the butsudan, the Buddhist alter inside the house. This is to aid their ancestors’ spirits as they come home, and then depart back to the spirit world. Other offerings include cucumbers and eggplants on propped up on wooden skewers. It is said that these two vegetable offerings represent horses and cows, respectively. The horses help the spirits quickly come home to family whilst the cows help guide them back to the spirit world at a leisurely pace on the 16th August, the last day of Obon. Lanterns and other decorations are also placed around the Buddhist alter inside the home.

In Matsumoto, many people don’t eat meat during Obon and instead eat purely vegetarian dishes called shōjinryōri whilst in other places in Chushin, such as Yamagata Village near Matsumoto and in Kiso, where Se-Gil lives, it is traditional to eat tempura and sashimi during Obon. In more northern Nagano, some families eat seaweed jelly. In Suwa and Okaya, families also eat eel as it is said to provide nutrients to help combat the heat during the summer months. It is also traditional at this time of year to have a big meal with the entire family during the 14th and 15th of August.

On the final day of Obon, fires with kanba or wara are again lit outside of homes in order to send the family spirits back to the spirit world. Fireworks displays, known as hanabi, are also traditionally held at various venues around Japan during Obon. Although the specific celebrations and practices will vary from family to family, Obon is one of the few events of the year that is all about families spending time together and returning home to their roots with the spirits who are dear to them.

During Obon, many dances and celebrations are held in Nagano Prefecture, and two of the most famous are Matsumoto Bon Bon and Binzuru in Nagano City. Beccie was lucky enough to attend Matsumoto Bon Bon in 2019. During the day of the festival, various food stalls were assembled along Nawate Street (Frog Street) and Nakamachi Street. The streets were lined with white paper hangings. On the early August day they assembled their group of dancers, and danced from 6 p.m. until 9 p.m. They paused every half an hour for a break. They had a lot of fun, and it was a positive experience celebrating Obon. Unfortunately, this year we can’t participate in these celebrations because of COVID-19, but we can still find other ways to enjoy our summer by spending time outside in the Chushin area and talking to our friends over social media.

Matsumoto Bon Bon parade in 2019 (This video is not associated with JET.)

Each region will usually have its own unique bon odori as well as a song. The local dances and songs usually pertain to the history or characteristics of that specific region. For example, Kiso Town has a very mellow Obon song that mentions some of the traditional clothing, the iconic Mt. Ontake, and cool summers. In contrast, Matsumoto’s very upbeat song includes lyrics about its castle and apple blossoms.

Shortly after Se-Gil arrived in Japan in August of 2019, he participated in the small Obon celebration in his small town of Kiso. The celebration was simply people gathering in front of the community center to learn the song and dance, dancing in a circle for about an hour each night. At most, there were maybe 30 people in a night. But even without the fanfare and big crowds, he felt the beauty and sincerity of Obon, despite not having a full grasp yet on its meaning.

Many of us may just think of Obon as the time when we get days off of work or go to fun festivals (pre-COVID-19 era). But for Japan, there is so much history, tradition, and joy connected to this holiday. We hope this article has helped you better understand the meaning of Obon, and perhaps, you can also share your Obon experiences with your friends abroad.

This article was originally featured on the Nagano JETs page.

Feature image: A traditional butsudan, a Buddhist altar, in a JTE’s home in Matsumoto

email
Arts, Culture, From the MagazineBuddhistfestivalNaganoOban