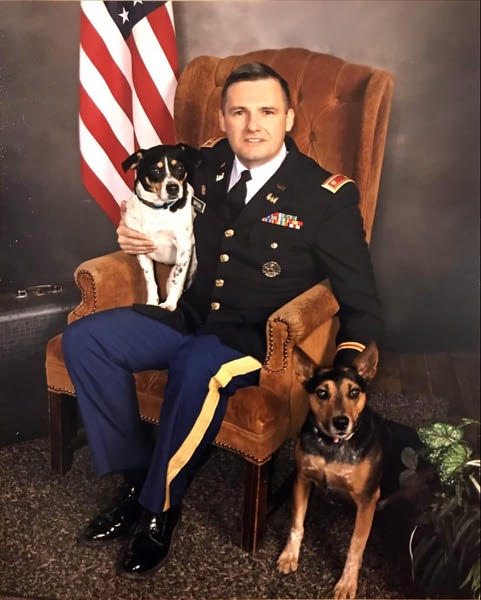 My name is Patrick Ripton and I grew up in Western NY State, on Lake Ontario. I have been living outside of Kansas City on the Kansas side for the last year as a student in the U.S. Army’s Command and General Staff Officer’s Course, held at Fort Leavenworth. Shortly, I will be relocating to outside Louisville, Kentucky, my sixth ‘Permanent Change of Station’ move.

I completed undergraduate studies at the University of Rochester, Rochester, New York. My degree is in English and Religious Studies. The UR has a great scholarship called Take Five, where students petition for a fifth year of academic study that is non-degree producing, study for the sake of study. I put together a program on Japanese culture for my fifth year, focusing on language, history, and religion.

I completed a master’s degree in Engineering Management in 2013 at Missouri University of Science and Technology while stationed in central Missouri. The Army Engineer Regiment created a cooperative program with Missouri S&T for an accelerated degree that included credits as part of the Army’s Captain’s Career Course.

Currently, I’m completing another master’s program here at the Command and General Staff College that is a thesis-driven exploration of the Japanese Self-Defense Force’s new Amphibious Rapid Deployment Brigade and its larger role in the strategic security situation in East Asia.

I discovered the JET Program when I learned I would not have time to study abroad in Japan as part of my Take Five program. Imagine my surprise, excited to see Japan’s storied temples and historical sites, when I was assigned to Okinawa Prefecture in 2001. Nothing in any of my courses had even brushed on the topic of Okinawa, and I admit I had to search online to even see where it was. The adjustment period was quite long. I was not only adjusting to the change from American culture to Japanese culture, but from my expectations of what Japan would be like to the reality of what Okinawa is. Following three years, I was offered a contract extension in Shiga Prefecture, where I taught for one year. It turns out that I had developed quite a love for Okinawa, and so following the conclusion of my contract in Nagahama City, I traveled back down to Okinawa to finish preparing for the JLPT.

In 2008, after working at the Consulate-General of Japan in San Francisco for a year, I went to Army Basic Combat Training in Fort Jackson, South Carolina, and commissioned as a Second Lieutenant in 2009, as an Engineer Officer. Earlier this year I was promoted to Major. I have had the opportunity to travel to Japan multiple times for work, and used my language skills and cultural understanding heavily each time.

Being placed in Okinawa was certainly unique for the beautiful weather and beaches, but it really opened my eyes to a lot of interesting historical narratives that are less circulated. Locals are happy to tell you about how their culture is different from mainland Japan’s, and how the history and politics of the islands are distinct from most. I can remember sitting with my karate instructor after practice and hearing about his experiences as a shoeless young boy following the Battle of Okinawa. I can remember controversy over the vote for a pro-U.S. military base governor winning in Nago, in the north of the main island of Okinawa, and how it muddled my understanding of the growing anti-base movement throughout the prefecture. I think more than anything, I enjoyed my time in Okinawa most once I had realized what a truly international place it is. Yes, there are huge walls between the many service members stationed in Okinawa and the local population, but there are also many surprising places where these cultures interact and shape one another. Coming to understand how the Okinawan government and people formed part of an interesting three-party conversation, with the mainland government and the U.S. military and government, really helped me understand how dynamic and relevant Okinawa is today.

Making friends with members of the military also had a huge impact on me, and not just because they were often kind enough to bring me on base to go grocery shopping. I had never considered a career in the military before moving to Okinawa, but seeing friends meaningfully engaged in the different positions they held helped me envision something similar for my next, post-JET adventure. I am always surprised that I do not meet more JET alum in the military; the overlap was always very clear to me. Here I was, teaching in Japan, an ambassador of my country, experiencing a new place while imparting my own values, but my military friends were very much doing the same.

The sheer number of deep, personal friendships I was able to make in Okinawa has had the deepest impact on me. It is easy to continue to care about the welfare of Okinawa and its development with the number of connections I made on-island and work hard to maintain today. I can clearly remember the first trip I made back after moving to Honshu, walking down the street and running into multiple groups of friends just walking the street. I never achieved anywhere near that degree of connection when I left Okinawa, and I missed it. I’ve been a big fan of the JETAA KenJETkai program and the notion of a ‘JET Hometown’ for some time. I certainly value the relationship I keep with Okinawa today and would return in a heartbeat.

I think that true, meaningful integration in Japan requires non-Japanese people to partition their brains. From a religious perspective, from a social values perspective, from a career perspective, media, family, language, technology, identity: the lens of Japan is fundamentally different from the perspectives I brought with me from the US. At some point I had the realization, maybe there is just a very different way of doing things from what I know, and maybe it is equally valid. This may sound like subjective mumbo-jumbo, but the ability to come to understand and, to the best of my ability, apply these sui generis values helped me in Japan and has helped me tremendously in my professional life. On JET I learned to pause the immediate application of my worldview and take the time to suss out native problem-solving strategies, local norms, and extant paradigms. In the Army, specifically, this has helped me come to terms with a new ‘foreign’ culture, the differences of which stood out to me particularly as a 30-year-old recruit. But, every professional interaction asks us to understand the intents and unspoken expectations of our peers, superiors, and subordinates, inside our organizations as well as outside. Japan and JET taught me to listen, observe, and understand before I acted, and I believe it has made me a more responsive and sensitive member of every team I have been on.

Do not ignore military service as a legitimate post-JET occupation, either as your next adventure or a career. Not everyone is inclined toward military service. There have certainly been a great number of challenges in my 12 years, and without a clear desire to serve, I doubt I would have weathered them. But, the military offers real opportunities for personal development within a legitimate professional organization that has incalculable global influence. The drive that pushed me from my hometown, where I had remained for 22 years, to an unknown corner of the Pacific where I had no control over my position or location, is the same drive that launched me on this path. Wherever a member of the military goes abroad, he or she goes as an ambassador of the U.S., with many of the same responsibilities and challenges as a JET, executed in a context of real purpose. I have met the smartest, most driven people of my life in the Army and have had the opportunity to serve in many diverse, challenging, and rewarding positions. Anyone who has successfully managed the stresses, hardships, and humbling moments of the JET Program is already in a great position to come to make meaningful contributions to the military’s mission.

email
Alumni Spotlight, From the MagazinemilitaryOkinawa