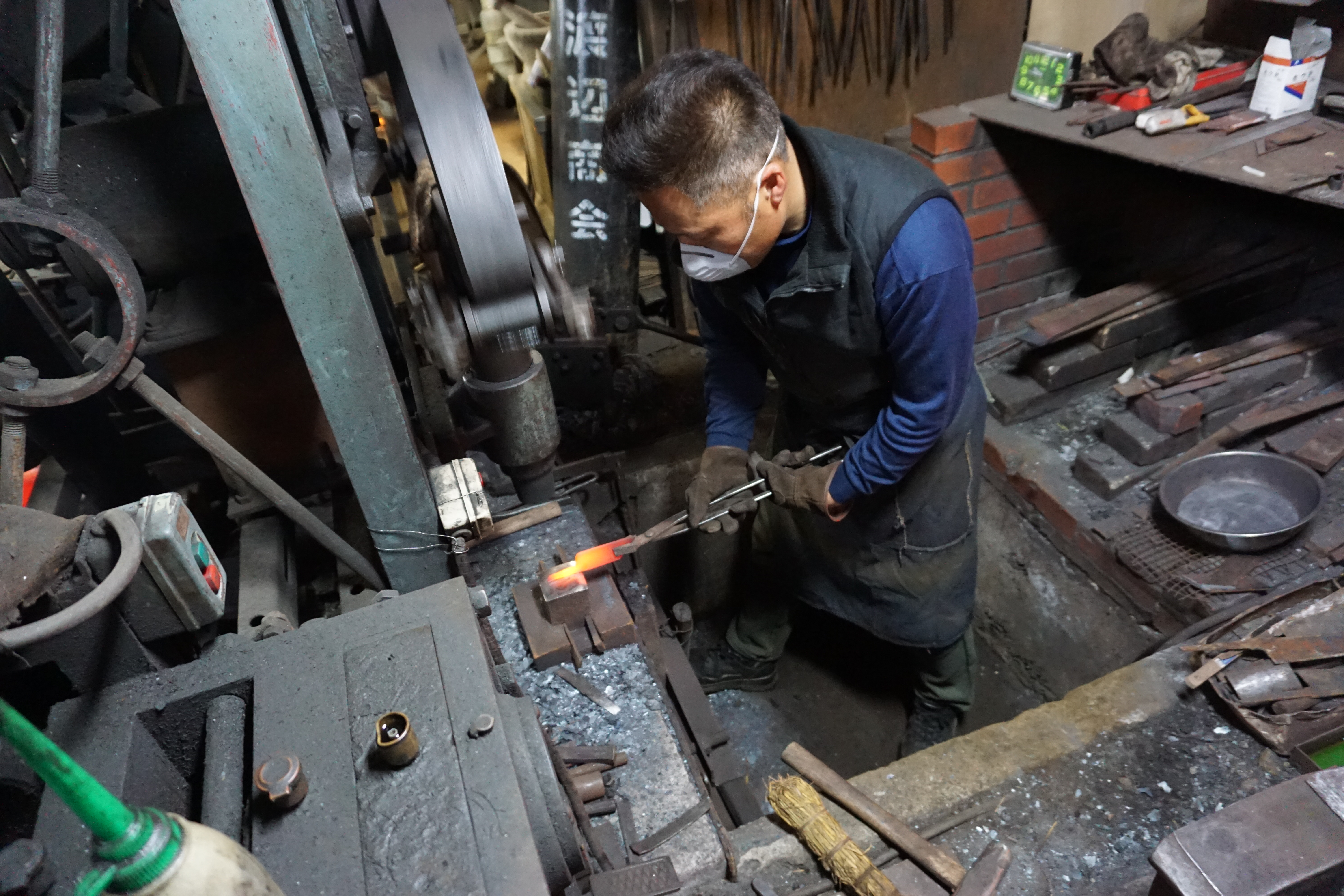 When one thinks of Japanese history, the weapons of the samurai are among the most iconic artifacts. Forged from iron-sand and superheated in kilns, the metal blades are shaped, reinforced, and hammered again and again. Razor-sharp, some blades were said to be able to bisect leaves with the slightest touch.

Today, traditional forging is much rarer than it used to be. In recent years, the number of swordsmiths has dwindled to only several hundred, and their methods are being lost or discarded. One factor contributing to this is that the process to be certified as a smith is incredibly time-consuming and expensive. On average, it can take a smith five years to be approved and there is only one opportunity a year to pass a challenging entrance exam. To make matters even more difficult, the smith must be supported by their family this entire time, as the craft leaves no time for a job.

With this in mind, I was excited to have the great fortune of being selected to forge a knife with an aspiring swordsmith.

In the city of Yame, located in Fukuoka Prefecture, the Yame Traditional Crafts Museum is dedicated to preserving many of the area’s traditional arts and crafts. This includes the creation of indigo-dyed fabrics, pottery, washi paper, and gold-gilded Buddhist altars. During a past trip, I noticed a case full of beautiful cooking knives finely polished like mirrors. Upon inquiry, I discovered they were made by a local smith Taira Yasuaki, a second generation black smith and owner and operator of the Morihiro Blacksmith Factory. I was then presented with a chance to learn how to forge my own knife with Yasuaski-san at his factory. The selection process for this experience was determined through participants’ names being drawn from a lottery. Needless to say, I took the leap, applied, and put it at the back of my mind. After all, what are the chances that a foreign teacher would be selected? Yet only a month later I was shocked to receive my invitation.

On the day of the class, I arrived with my teacher and discovered that the factory was actually a short distance behind the farms of Yame Nogyo High School, a local agricultural school where I happen to work. The building was an unassuming wooden structure with a dirt floor and an attached house. Upon arrival, I met three other participants.

After a brief explanation, we started the forging process. Each of us was given a hand-sized rectangular piece of steel and led to a kiln. This kiln was a brick structure that superheated the metal. It was maintained at incredibly high temperatures, in the thousands of Celsius, and fed by an aerosolized jet of recycled oil.

Using tongs, Yasuaki-san placed our rectangles inside the furnace and superheated the metal. He then showed us how to use an automatic hammering device, which required rapidly rotating the axis of the metal piece back and forth. It was surprisingly tricky to coordinate the hammer and at least one piece of metal was destroyed in the process. Yasuaki-san targeted and hit a corner of the rectangle, which caused a dramatic transformation of the metal. The longer side of the parallelogram collapsed, resulting in a compacted, crude handle. We repeated the process with his guidance and were blown away by the deft skill involved. In moments the smith stretched out the softened metal samples and with rapid movements created visible blades and handles. Yasuaki-san then tapped the blade while holding it over a curvature, bending the metal into the gentle curve of a cooking knife.

There was a dizzying array of steps undertaken. The metal blades were further straightened and placed into piles of ash, which served to insulate the metal and temper their flexibility. Immediately cooling creates hard blades while the slower cooling used on our knives produces more flexible and pliable metal, which is useful in cooking utensils. I presume the carbon in the ash might also be used to complete the transformation of the steel.

After some general grinding and shaping, our blades were placed into a metal mold, which press cut the rough outlines into clear blades and removed excess material. We then placed the blades into an oven for preheating and dipped them into two vats for annealing. This process involves heating and cooling and is done several times after the initial forging to change the qualities and microscopic structure of the metal. I was surprised when it was revealed that the glowing lava-like material in one vat was actually superheated lead, and even more surprised when the blades floated on top of the substance. The coating in the prior vat acted as some sort of insulator and did not absorb the lead, which instead sealed the coating material to the blade, turning it deep black.

After that, we rapidly cooled the blades through water and dipped them into what appeared to be a deep fryer, leading to jokes about karaage (fried chicken). We then went through at least four different steps of sharpening and polishing with wet grindstones and rough brushes. The intricacy of the process was amazing, and we learned that the smith perfected the most expedient edge down to a single degree of angle. In addition to using the various wet grindstones, we also had to use wooden contraptions that held the knives at oblique angles for accurate grinding.

Finally, we had our blades . . . but we weren’t quite done yet. Using a chisel, we were shown how to hammer characters into the metal, allowing us to produce a rough prototype of what we wanted. Yasuaki-san quickly chiseled our names in katakana into the blades. In the last step, he used a blowtorch to superheat the blade handles and carefully tapped them into beautiful polished red wooden handles, which quickly fused and set. To emphasize just how sharp these new blades were, he brought the knife down lightly on a sheet of paper he held in one hand and it cut through it with no resistance.

It was amazing to see the transformation process. What first started as a rusty rectangle was transformed in a matter of hours into a gleaming, polished work of art.

Overall, I think it was an amazing experience. Video games like “Skyrim” and movies like “The Lord of the Rings” show such processes as being relatively quick. But in reality, it can be an incredibly time-consuming process. We were amazed to learn that while Yasuaki-san was capable of finishing some 120 short blades a day, his katana had taken nearly four months of hard work. In our case, it took nearly nine hours to forge four kitchen knives.

My own blade might not be a sword, but it is a precious work of art that I plan to pass down in my family. The process was long and difficult, but something that I will remember for the rest of my life. I obtained not only a beautiful blade, but a fascinating look into Japan’s martial past.

To learn more about traditional crafts in Yame, visit the website here.

Mark is a first-year high school ALT in Fukuoka hailing from Snohomish, Washington. Outside of teaching and the ALT adventure, he enjoys cosplay, alpine mountaineering, and nature photography.

email
Arts, Culture, From the Magazinebladeknifemetal