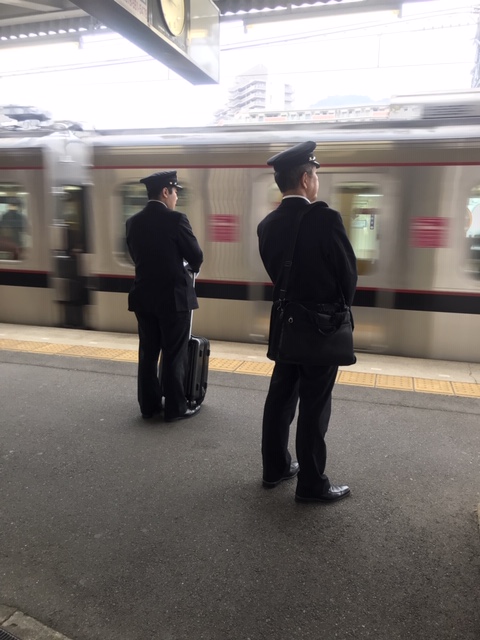 The train slows to a stop and fresh passengers step through the opening doors. The car is crowded during rush hour and across from me the bench is packed full of commuters. The new passengers look to the empty spaces on either side of me, wide enough to fit two people each. They look at each other and choose to stand for the next eight stops.

I rise from my seat at the coffee shop and meander to the women’s restrooms. A woman steps out and sharply gasps at the sight of me. Throwing her gaze to the ground, she skitters past me to safety.

A child of three or four walks down the hill of my neighborhood with his hand in his mom’s. He looks up from his teetering steps and freezes. “黒外人! 黒外人! こわい!” [Black foreigner! Black foreigner! SCARY!] He screams and points directly at me. I can still hear him over the music in my headphones as I pick up my pace.

On the train home from my birthday dinner, a Japanese man approaches my husband and I as we quietly chat by the door. He shouts at us in Japanese. Then he slurs in English, “Japanese only! Train for Japanese!” The doors open to the station before ours and he pushes my husband off the train. He tries to touch me as well, but my husband is back and in between me and the man. I look to the car for help, but everyone keeps their heads down.

A year into living in Japan, I should be used to these common occurrences, but it is not always easy to be reminded that you are and always will be an outsider. I expected this before making the decision to move here. I read accounts, spoke with current POC residents and watched YouTubers tell their stories. I constantly face racism and microaggressions in America, so I hoped that I would be prepared for what I would face in Japan.

In order to not feel isolated here, I knew I had to find people who have similar experiences to mine. In my foreigner community, I found other melanated people who go through the same reproaches that I do. When a group of us with sepia shades of skin ride the train or walk together, we definitely get looks. But it is much easier to ignore when you are not alone. We talk about our lives here and back home over dinner, drinks and desserts. Even if our experiences may vary, sometimes it is rejuvenating to be around people who get it and don’t dismiss our unique experiences as just something that happens to all 外人 [foreigners].

For a further reach, I joined Facebook groups for people of color who live in Japan. I purchased my tickets for the annual Black Women In Japan conference, and I am more than excited to make more connections with the women+ who live across the country. At Tokyo orientation, I went to the JETs of African Decent dinner, where I spoke with senpai JETs about their lives, got advice, and made new friends in and around my city. It is important to know that you are not alone in what you are living day to day. There are many groups online for marginalized people, including but not limited to JET PH, Asian Pacific Islander JETs, Indians in Japan, Black in Japan, Jamaicans in Japan, and the new Viva JETS+!. Anytime someone posts in one of my groups that they will be visiting my city, I reach out and try to connect with them.

I also enjoy time with friends from other countries who are not black or brown. It’s interesting to talk about culture acceptance (or lack thereof) in their countries and to share experiences from my own. It’s wonderful that they are willing to listen instead of discounting what my life is like here. I also like to listen to their experiences as a foreigner in Japan, because sometimes it is just cathartic to talk and release.

And of course, it is important to make connections with Japanese people here. Whenever my husband and I go out with friends to an izakaya, he is great at initiating conversations with the local patrons. When I hear “それは僕の奥さんです” [that’s my wife!] I join in with my fledgling Japanese skills and have a good time making new single serving friends. We also have Japanese friends with whom we love to go to karaoke and battle between a medley of Japanese and English songs. It’s in between the “Country Roads” and “A Cruel Angel’s Thesis” that we all feel the cultural exchange.

Being a foreigner in Japan is one thing in a land of willful homogeneity, but to be a foreigner with black or brown skin brings another set of challenges. Children and adults unabashedly touch our hair, make comments or mock our skin tone. Darker skin is not a standard of beauty here. Skin whitening products are marketed as beautiful. We have to stand against stereotypes put out by Western media and perpetuated in the Asian media. And there is still the sanctioned Black face you can see on the NHK. I came to Japan knowing what I could face. But it’s one thing to know and another to experience it.

My job in Japan is to literally serve as cultural exposure in the classroom and daily life. I use pictures of people of color with ethnic names in my activities. I talk about what it is like to be a minority in America. When I understand that a student is making a rude comment about a person in the textbook, I alert the Japanese teacher in the room. When a coworker asks a question that is not acceptable, I let them know why. When someone reaches to touch my hair, I remind them that I am human and it is not ok to touch someone without their permission. I try hard to see someone’s negative reaction as based on lack of exposure and curiosity. However, this is a battle minorities cannot do on their own. Ultimately, it will have to come down to Japan’s willingness to make a change. But for the time being, all foreigners can plant the seeds for each other while we are here.

But despite the negatives, I really do love my life here and experiencing all that Japan and its people have to offer. For every unfortunate interaction, I have had many, many positive ones. When senior citizens stop me to talk and practice their English; when people go out of their way to help me find a location; when someone doesn’t just ask where I am from for the sake of knowing, but seems genuinely interested in learning about my background, I feel like Japan could be home. Even when a friend and I were stopped in the bank lobby for legitimately thirty minutes by a Japanese man who gave us an entire half English speech (with iPad pictures!) about his life in America back in the 80s. It is wonderful to have these moments of engagement and inclusion. And what helps the most is the readily available love and acceptance I receive from the students that I teach.

This past summer, as I sat in the ward office helping new ALTs register with the city, an older woman approached me and asked about my black and blue braids. She told me she found my hair beautiful and asked if she could touch it. Ninety-nine percent of the time I reject this request, but she had no ill intention behind her smile. She touched the ends of my hair so gently, and told me she had only seen hair like mine on TV. She seemed genuinely excited to see something different in real life. Her friend walked up and respectfully admired me, but did not reach up to touch me as well. As the general reaction is to grab at me, I appreciated it. I was happy to give these two women a small personal experience with my culture. It was one that I will certainly remember.