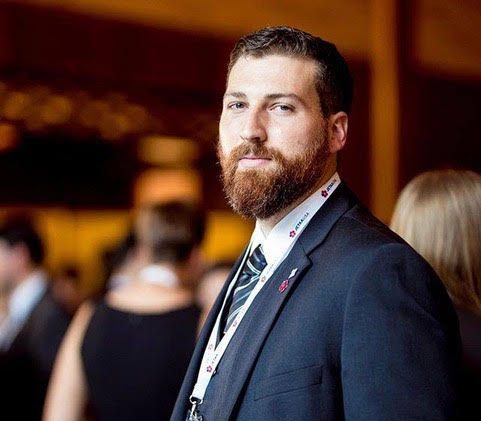 Hey everyone! I’m Xander Peterson, your friendly neighborhood JET alumnus. I’m originally from sunny Santa Cruz, California, and currently live and work in San Francisco. I’ve been pretty active in the JET alumni community and have held a number of positions related to JET since I returned from JET in 2012. My positions have included:

I went to UCLA for my undergraduate and double majored in Cognitive Science and Japanese. I chose Cognitive Science because I was fascinated with the classes that focused on learning, memory, and cognition. As an added benefit, I was able to use my research to be a more effective teacher on JET.

As for Japanese, my father was a game designer back in the 90’s, so I grew up playing a lot of video games with him and my friends. He was also a big fan of old samurai and Godzilla movies, which we would watch together. Those humble geeky origins were the impetus for my initial interest in Japan. I studied abroad in Yamanashi Prefecture for half a year, which got my Japanese up to a JLPT 2 level by the time I graduated college. I thoroughly enjoyed my time in Japan and loved the culture and language exchange aspect, so when I returned I founded and was President of the Japan American Culture & Language Exchange Club (JPAM) at UCLA. Promoting grassroots international exchange was already in my blood! As luck would have it, an alumni from my fraternity had gone on JET in the 90’s, and he told me about the program and convinced me to apply. Thankfully I was accepted, and the rest is history!

I was an ALT on JET from 2009 – 2012 in Miyakonojo City, Miyazaki Prefecture. I taught at 11 elementary schools and 5 junior high schools, which was perfect for me — I used to be a summer camp counselor in Santa Cruz, so the opportunity to work with that age group was a primary reason why I joined JET. It was great to see all the similarities and differences between American and Japanese elementary school students.

Now that it’s been 10 years since I first arrived there, my oldest students are turning 22. I’ve been fortunate enough to stay in contact with a handful of them, and even grabbed drinks with one last year! They grow up so fast 😭

I currently work as a Teaching Engineer at Lyft, where I develop technical curriculum, facilitate classes, manage projects, and code internal tools for my team. The job is a perfect combination of my experiences of teaching and lesson development on JET, program managing at the Consulate, and software engineering at my prior startup. I’m very fortunate to work with a wonderful team and love what I do!

Oh man, there are way too many great memorable experiences to share! I’d say the one that had the greatest impact on me involved one of my 5th graders. It was the holiday season and I had picked up a gingerbread house kit from Costco. I built the house and brought it to all my schools to share that aspect of Western Christmas culture. One of my 5th grade boys was so moved by it that he set out to build his own. As I later heard from his teacher, he went to all the libraries in the city until he found one that had a cookbook with the recipe for a gingerbread house. He then spent his lunch recesses inside the home economy room. It’s very hard to get cookies to bake in an exact rectangle, so he had to make multiple attempts at baking the walls and roofs to get them just right. (I had simply used a pre-cooked kit!) The next time I went to that school the student showed me his finished product. His teacher took me aside and told me all about the efforts he went through. The part that I’ll never forget — the part that left the biggest impact on me — was that this boy had put in all this effort to make this gingerbread house because he wanted to bring it to the hospital to show his little sister, who was dying of leukemia. She passed away a few months later.

That experience, and many more like it, taught me about the importance of culture and language exchange, and the myriad ways it can positively impact people’s lives. Promoting those virtues has now become an integral part of who I am and what I value, and is the basis for why I work so hard to promote the JET Program and the alumni associations.

JET played a very direct role in my professional career. I loved my students and my years as an ALT, but after 3 years I realized that I wanted to reach a wider global audience than beyond just my schools. I felt that if I were to work in educational technology (“edtech”) I could develop apps that would be used by millions of students in Japan and around the world.

A few months after returning to the Bay Area in 2012 I was applied and was offered the job with MOFA as the JET Program Coordinator at the Consulate General of Japan in San Francisco. It wasn’t a position in edtech, but I knew that if I did a great job as JET Program Coordinator, I would have a large positive secondhand effect across Japan. The position was fantastic; I loved recruiting prospective JETs in the fall, interviewing them in the winter, training and preparing them in the spring, and then sending them off in the summer. It was very rewarding, and my knowledge of having just recently been a JET was key to doing a great job. However, the low pay made it extremely difficult to live in San Francisco, so I knew I was going to need to make a change.

That change came in the form of attending Dev Bootcamp, the first programming bootcamp designed to teach complete beginners enough coding in just 6 months to be able to land a job as a junior developer. Not only would the pay as a software engineer be better, but it would move me closer towards my goal of working in edtech. I left the Consulate in the fall of 2015, went through the bootcamp, and by March of 2016 I was working as a junior software engineer at a startup in the city developing online mortgage software. I grew my skills there as an engineer for 3 years and left in April 2019 when I had the opportunity to join Lyft as a Teaching Engineer. (Fun fact: The woman who taught me how to code at Dev Bootcamp is now my manager!) My time as an ALT gave me the skills to be able to design insightful curriculum and manage a classroom — you’d be surprised how similar managing a classroom of fifth-graders is to managing a classroom of engineers!

I would highly recommend that JETs consider joining the tech industry — you’ll be working on products that can positively affect the lives of millions, your coworkers will be a diverse group of intelligent and inspirational individuals, and the salary is extremely competitive. There are a large number of different job types that are needed; for example, you could be a software engineer, a UI / UX researcher or designer, a digital illustrator, or a project manager. There is now an abundance of online classes and part-time bootcamps offered for all of these fields and others. I would highly recommend going through one of these programs while on JET in your ample free time to gain a solid, marketable skill for when you finish JET. You should then join my latest endeavor, the JET Program Developers group, a community for current JETs and JET alumni alike who are or wish to become software developers, UI / UX designers, project managers, and any other role commonly found in software development. Developing these skills and building a resume can be difficult, so this group exists to provide a supportive community and open-source projects to put on your resume. You can learn more and join by emailing me at xanderpson@gmail.com.