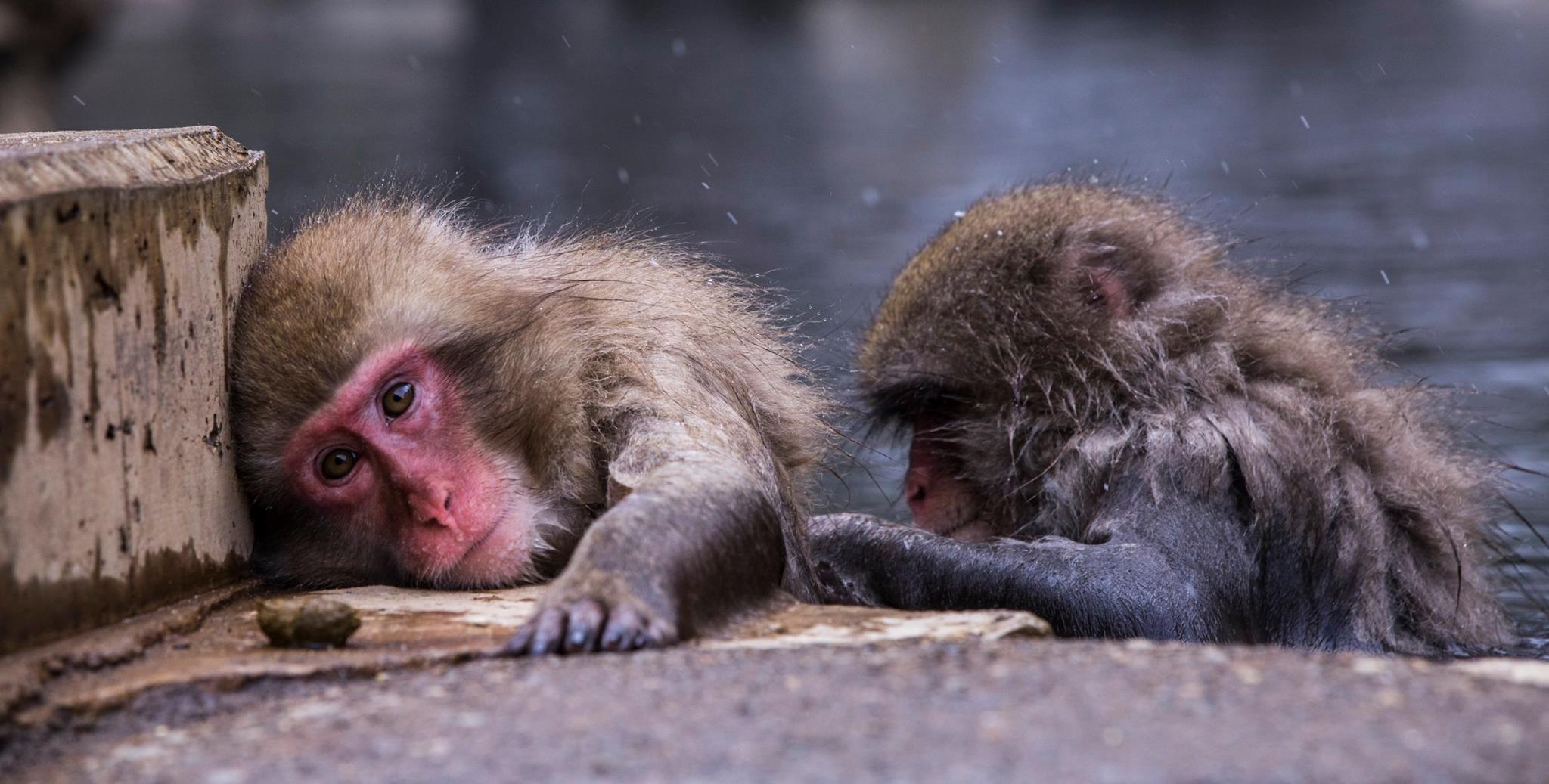 This article originally featured in the February 2019 issue of Connect.

On a crisp early winter day, we set out towards Jigokudani Monkey Park. The beautiful Jigokudani valley led the way. Its steep cliffs and steaming hot springs inspired the name “Hell Valley”, so naturally we gleefully walked deeper and deeper into “hell” with the promise of monkeys.

Suddenly four monkeys appeared on the side of the road, their brown fluffy fur camouflaging them into the brown forest. Some of us had already walked past them before we noticed that the fluffy things weren’t a kind of strange Japanese plant but living macaque monkeys watching us go by. We eagerly took pictures of them, then continued on with high hopes of seeing more. 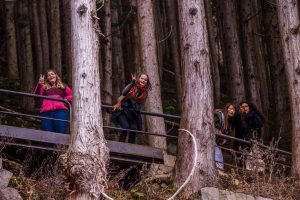 The welcome center at the monkey park has signs about how to behave when around the monkeys. They warned that the monkeys could become aggressive if we approach them too quickly, look directly into their eyes, try to feed them, or stand with our arms outstretched trying to get a picture. Basically, don’t make the monkeys feel threatened; they’re not afraid to fight. Of course, after seeing these signs, I was very intimidated by these fluffy creatures. They’re cute, but they will cut you.

So holding my breath, I walked into the monkey park. You know that aggressive urge you get when you see something too cute? It’s very troublesome when you know you would lose a fight to the cute thing. 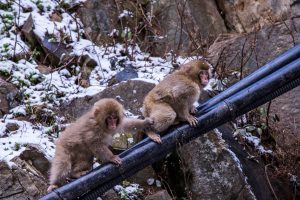 But enough about the fear; the monkeys are really amazing. I was surprised by how many monkeys there were! Even though it is a monkey park, I have never seen so many monkeys in one location before. They easily numbered in the hundreds. They leapt through the hillside, gracefully ran after another, and shook the trees with their bouncing. They definitely had a sense of humor and no fear of heights. My favorite monkey at the park was a baby that realized one rock was tilted like a seesaw. He started jumping and rocking it back and forth. An older monkey must have been too tired to handle the young monkey’s excitement, because she came over and shooed him away from the rock. Naturally however, as children do, he was right back at it once the older monkey turned away.

The younger monkeys were definitely the most fun to watch — perhaps because they were less likely to win a fight. We found one group of four young monkeys in a cluster of trees. They had learned that the branches could bend so they started a game of jumping on the branches, trying to knock each other off their respective branch. When they fell, they tumbled onto the branches below and rolled to the bottom. Then they would climb back up and start again! 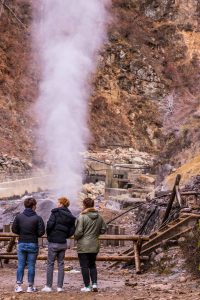 The only unfortunate part of our trip was that the weather was slightly too warm for the monkeys to enter into their onsen. A few were sitting in the onsen, but when they approached the hot spring they mostly just sat around the edge, occasionally sticking their faces in to drink water. However, those of us who braved the cold the next morning after it snowed got to see the Japanese macaques in their famous pose – settled comfortably in the hot spring with their hands clasped over the edge.

Personally, my favorite monkey wasn’t found in the monkey park. While walking through the town of Yamanouchi tasting some of the local sake and taking in the beautiful valley, our group suddenly noticed a monkey perched on top of someone’s house eating a persimmon. Monkeys are completely foreign to me, having grown up in central US, so to see one so casually sitting on top of someone’s house was surprising. He looked as natural as a bird up there! However, this monkey had attitude. Aware of the group of humans suddenly ogling him and taking his picture, he started to get annoyed. Wanting to be left in peace with his persimmon, he took the seeds he had been collecting and hurled them at us. Lucky for us, monkeys aren’t going to be in Major League Baseball anytime soon, but we got his message. We left to continue exploring and looking out for other monkeys around town. 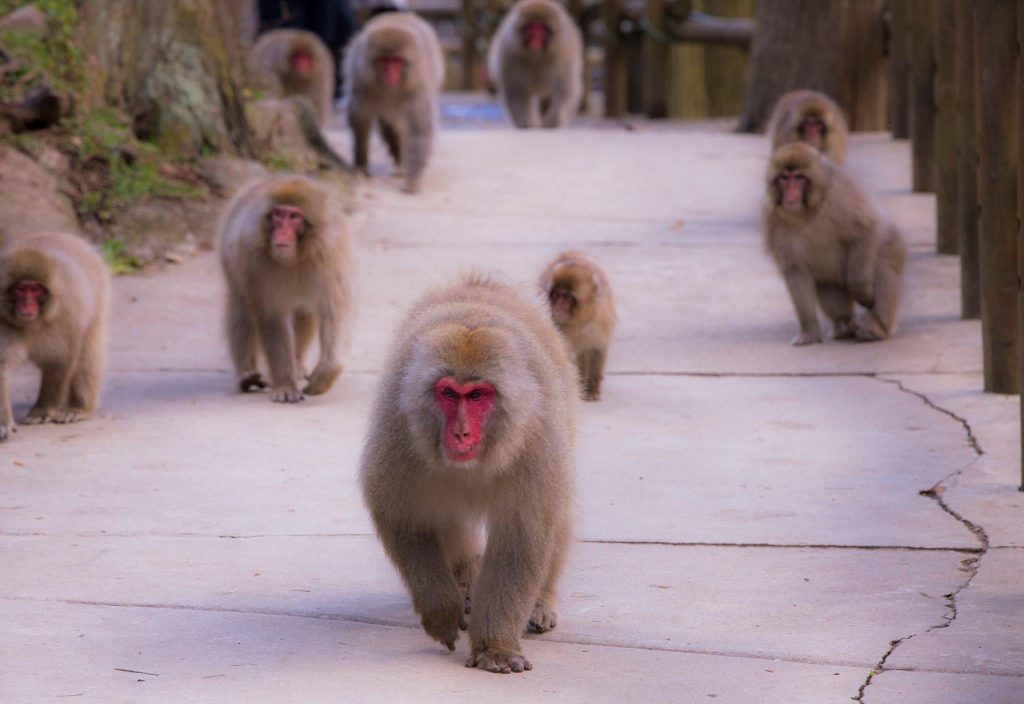 Traveling with AJET is always a bit of a risk, even more so when you travel with an AJET group filled with people who aren’t from your prefecture. You never know if you will get along with the other people or if the trip will live up to your expectations. However, this AJET trip brought together some great ALTs, and I’m grateful that I got to share this experience with such funny and intelligent people. We had fun monkeying around that weekend.

To learn more and watch the monkey onsen livestream, you can visit jigokudani-yaenkoen.co.jp.

Carolyne Wilhelm is a first year JET from the US. Her hobbies are watching movies, getting lost, meeting new people, and appreciating the amazing views the world has to offer. She tends to do odd things like study French for eight years then move to Japan. Her main goal in life is to eat her way around the world.

email
From the Magazine, Lifestyle, TravelAJETJapanNaganotravel