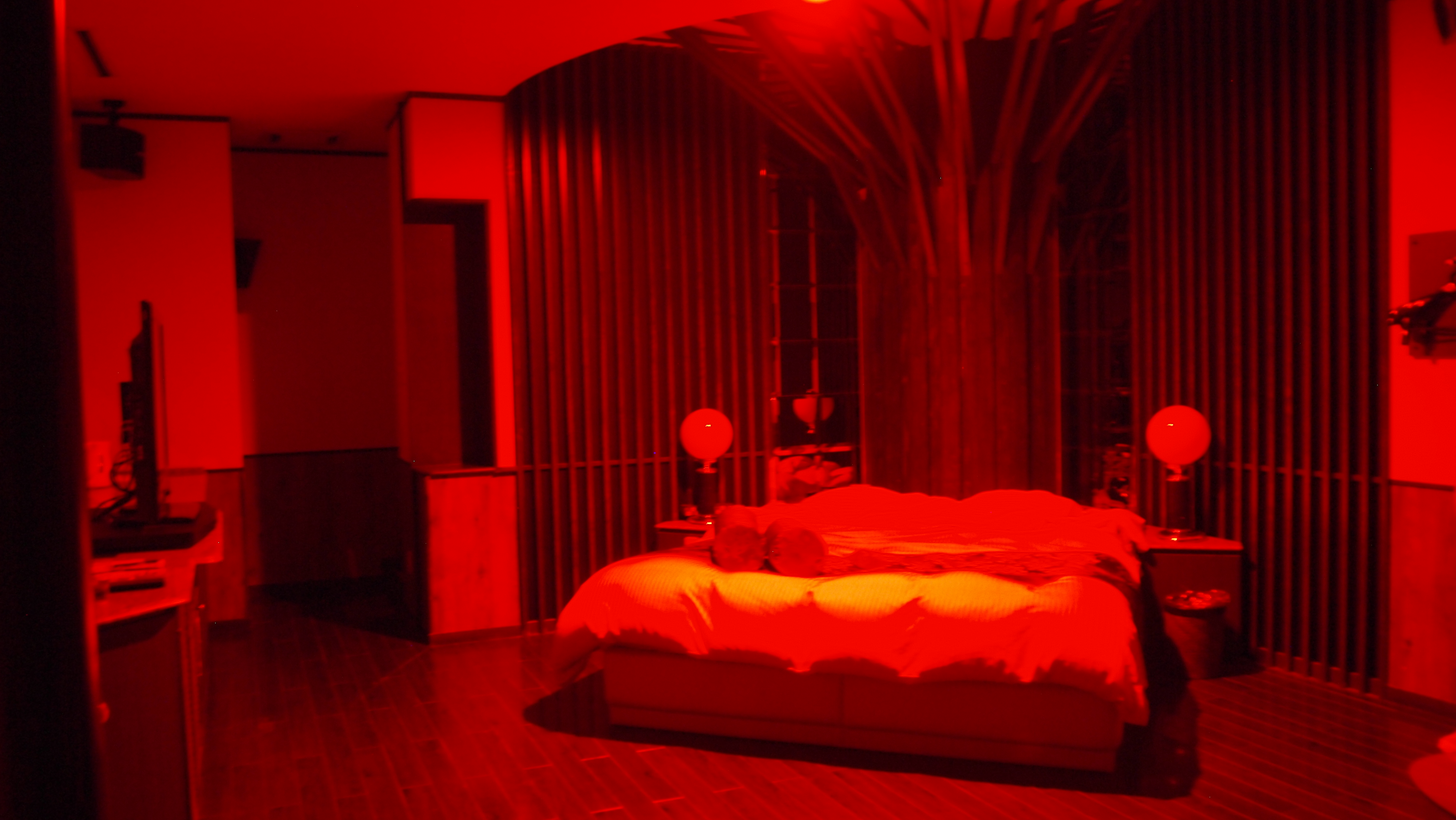 This July, my teaching contract ends and my husband and I will leave Japan. Faced with only a few months left in a country we adore, an overwhelming array of last minute must-sees taunt and drift past us like cherry blossoms falling from the trees. Recently, however, as the ultimate culmination of our time in Japan, we checked off one of the most important places on our to-go list. We finally stayed at Jzauruss, a love hotel in Beppu that is lovingly crafted after Jurassic Park, everyone’s favorite dinosaur adventure movie.

For those unfamiliar with love hotel culture, they are hotels designed with the sole purpose of secret sex. I won’t pretend to be an expert on the social constructs — the shifting expectations of marriage in Japan, the rumored prominence of affairs — that make this kind of hotel desirable. They make for a fascinating product, though: facilities with zero face-to-face interaction, secluded parking lots, automated transactions, and guests who are locked inside of their rooms until they pay to get out. On our first visit to a love hotel last year, I fondly dubbed it a “love prison.”

There was no one I’d rather be trapped with than my husband John, I thought, as he drove us through pitch black Beppu neighborhoods to our destination. Still, staring out the passenger side window, I admitted, “I’m actually kind of scared.”

We pulled into the carpark, a dark cavern with tarps blocking each space for anonymity. We were greeted by strobe lights and a red-lit velociraptor peering at us through barred windows. Cautiously, I took John’s arm and we entered the artificial ivy-covered door.

The lobby was tight but truly committed. To our right, behind some wire caging, was a Jeep nestled in a dark forest. On our left was a tiny display of animatronic baby dinosaurs. There were no attendants of course, just a large touch screen to select from available rooms. We’d already perused the website and decided on 201 for its spaciousness and outdoor bath. It was vacant, so we selected it on the screen and called the elevator, which blasted us with more strobe lights and wailing T-rex sounds. And I thought I was scared before… 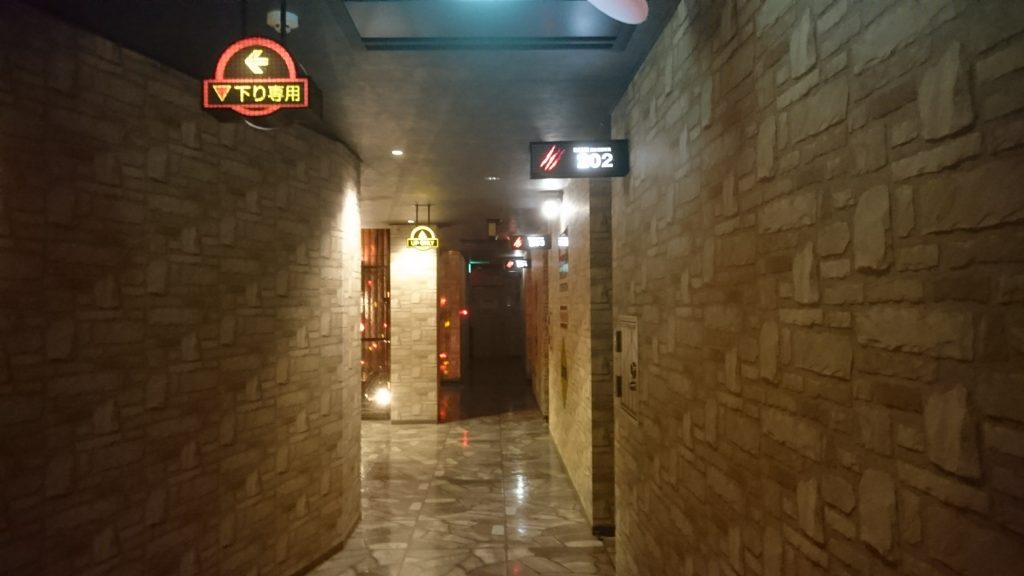 We got to our floor and wandered the hallways — exposed brick, danger signs — indeed indicative of passageways where one might hide from a dinosaur, or perhaps run through en route to the computer lab to reactivate the electric fences. There was also an inexplicable but impressive campsite diorama. 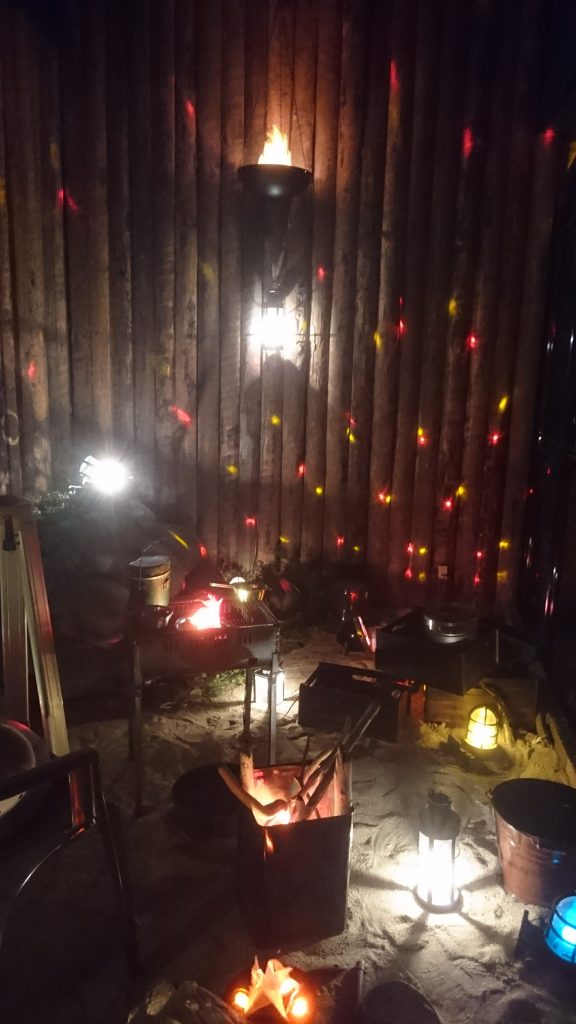 Then — hold onto your butts — the moment of truth. We found 201, left our shoes in the genkan, and opened the door to the rest of our evening. Despite the “No Smoking” sign, there was a faint smell of cigarettes. The décor was more tasteful, less jungle than expected. I guess they were going for the sleek, ultra-modern look of the Jurassic Park guest facilities before dinosaurs wrecked the place. (Some rooms are more on the nose than others; in room 307, the bed is in a cage!) 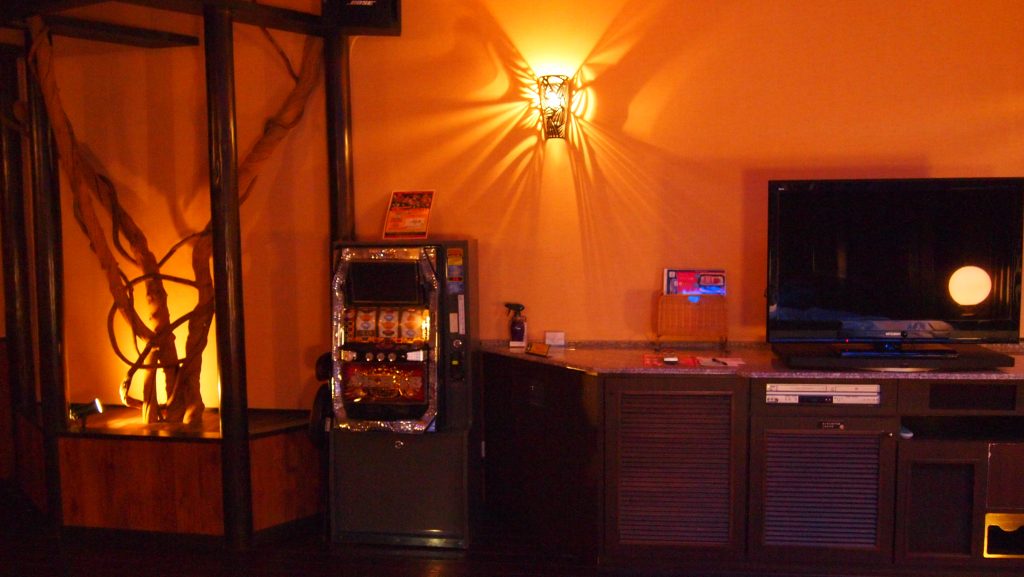 The phone rang — an attendant asking how much time we were paying for. I responded, tomari (overnight). As I hung up, we heard a click — our door automatically locking from the outside. We settled in and did some exploring. 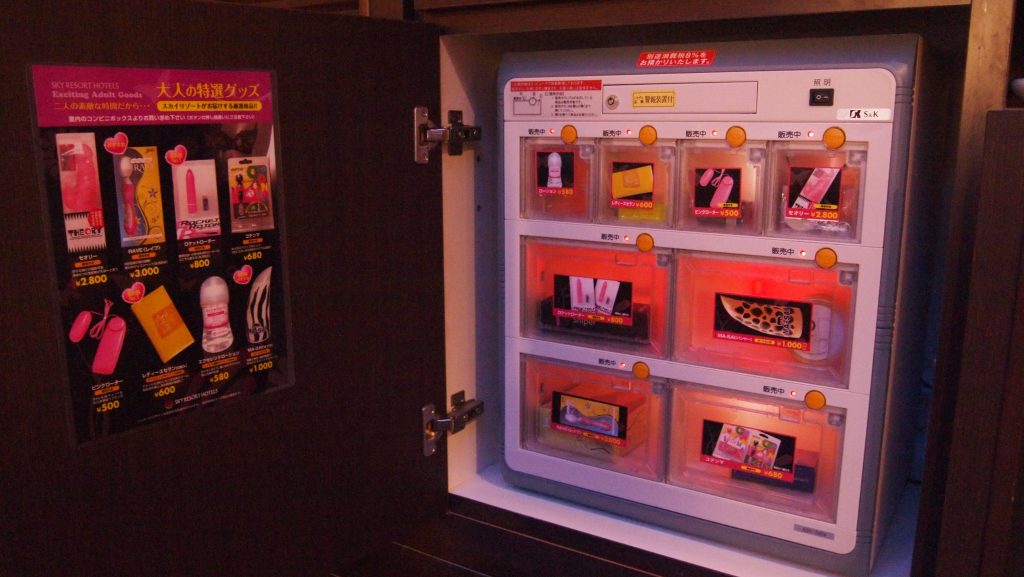 A cabinet under the TV revealed a sex toy vending machine with everything from lube to mini-vibrators. Plugged in next to the bed and free for use was a variation of the super-powerful Hitachi Magic Wand. It had a thoughtful wrapper ensuring it was “Washed Up,” nice and sterilized for the next customer. For extra cleanliness, there was even a free oversized condom to use with it. There were also stackable sex cushions and a sort of rocking-sex-chair-thing that a couple more creative than us might have known how to utilize. (It had a “Washed Up” wrapper around it too.) 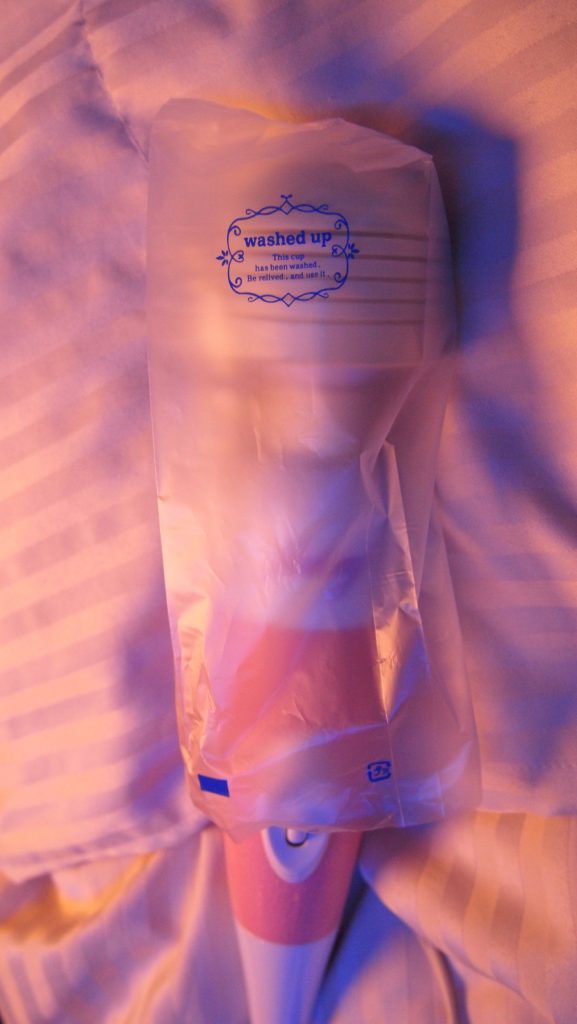 At the head of the bed, there were an array of buttons to control the lighting. Best of all was a big red button that read “Sky Sexy Light.” Pressing it turned everything red, like crimson night-vision goggles. 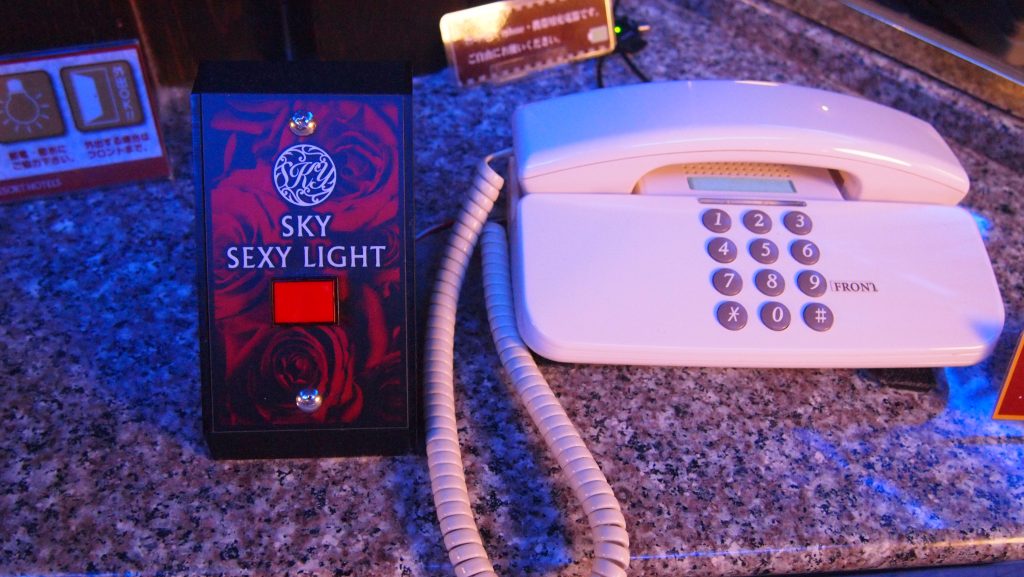 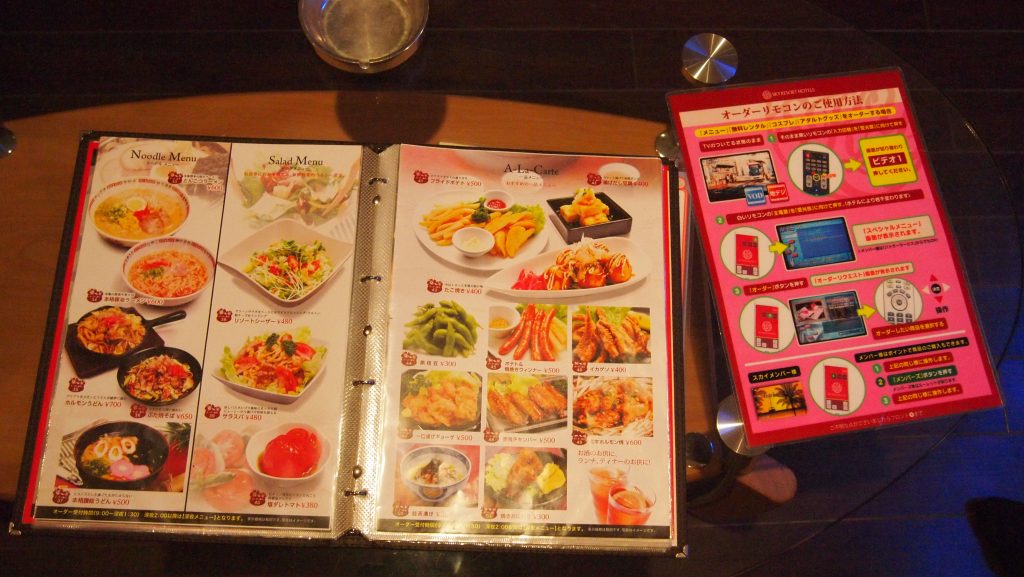 Nonetheless, it was a lovely evening free from dinosaur disturbances. The next morning, despite the pitch black (one thing I hate about love hotels is the lack of windows), we woke up early enough to take a nice bath in the oversized bathtub that overlooks Beppu City. The sunlight alone was worth the extra money. 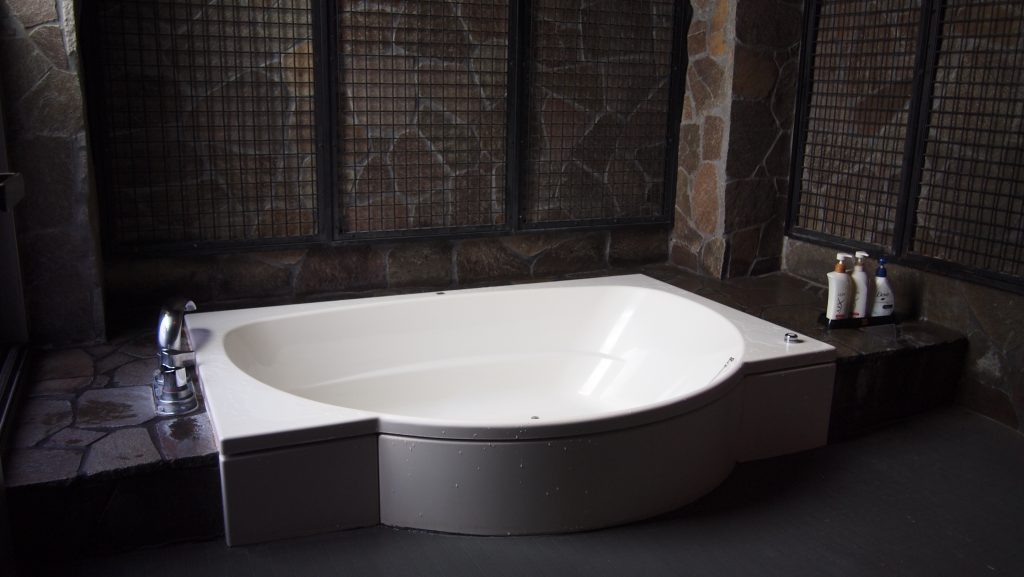 We paid via pneumatic tube on a machine near the door. We simply found the チェックアウト (chekkuauto; checkout) button, placed our cash in the cartridge, hit “send,” and watched it get sucked up to — I assume — a service desk somewhere. Less than a minute later, the cartridge returned with our change and a receipt. We gathered our things and emerged feeling like we’d spent a weekend at the spa. Ravenous, we went to a wonderful bakery nearby called ココラート (Cocolate). There is nothing quite so delicious as brunch after a night in a love hotel.

Like many 90s girls, I experienced my first sexual awakening in a dark theater watching Dr. Ian Malcom, chest glistening, leg bandaged from a fresh T-rex bite, make some snarky comment about how when the Pirates of the Caribbean ride breaks down, the pirates don’t eat the tourists. Now, in my 30s, going to this Jurassic Park- themed hotel that is specifically designed for sex, well, I feel somehow that I’ve come full circle. To quote my dear wise Malcom, “Life, uh, finds a way.”

Sierra Nicole Rhoden is an ALT at two junior high schools in Nakatsu, Oita Prefecture. Previously based in Chicago, she has a background in art history and arts journalism. She loves animals, writing, reading, and drinking tea (both English and Japanese). She is also an occasional freelance illustrator and loves taking ballet classes at her local dance studio. She is sometimes struck with bittersweet pangs of nostalgia when her small Southern Japanese town reminds her of the small Southern American town she grew up in. You can see more of her work on sierranikki.com and her blog Gaijinette .