What exactly is it about art that creates world-wide recognition? What makes it so uniquely interesting that despite having different origins it can flourish to stardom in a completely different country? The Mori Art Museum set out to answer these questions with its new Stars exhibition. (1) Showcasing the work of the following contemporary artists: Yayoi Kusama, Lee Ufan, Tatsuo Miyajima, Takashi Murakami, Yoshitomo Nara and Hiroshi Sugimoto, the museum has taken the opportunity to celebrate the international stardom that the artists have reached in modern Japan and worldwide.

The museum wasted no time in showing Takashi Murakami’s work first. Japan is well known for its kawaii and otaku (geek/fandom) culture and Murakami’s work is a rich embodiment of this. The artist is well known for his super flat and far from realistic designs. He does a great job mixing the bubblegum kawaii fantasy culture of Japan and extreme sexualisation. His work ranges from well-endowed anime-style sculptures to his adorably erratic and colourful mural of Mt. Fuji and flowers. Murakami is the embodiment of every geeky stereotype people have of Japan on crack. Murakami’s massive sculptures of a troll-like figure are especially worth seeing. The attention to all of the small details makes the sculptures look ready to come alive at any point.

His smaller and highly sexualised anime-style characters do a great job of highlighting the unrealistic expectations of the human body that many people face today in modern-day in Japan. 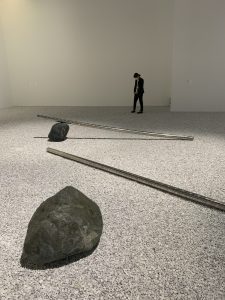 After the first shock to the senses, the exhibition takes a more mellow turn by leading onto Lee Ufan’s exhibition. Away from the starkly bright colours and sensory overload of Murakami, Ufan’s work makes you pause for a moment. As soon as you walk into his section you find small stones scattered across the floor. The Korean born minimalist artist sets out to remind viewers that everything in the world is connected. In an interview with Apollo International Art Magazine, Ufan touches on why stones are a recurring motif in his work, saying, “Stones are the oldest thing we ever encounter in our world. I really want you to hear the voice of these things: to put the manmade and non-manmade in juxtaposition.” (2) The contrast between the exhibitions of Murakami and Ufan highlight the complexity of Japanese art.

Yayoi Kusama was arguably my favourite artist of the exhibition-though her work is not for people who suffer from trypophobia (fear of clusters of dots). Her work is a reflection of the visual and auditory hallucinations that she faced throughout her childhood. She does a brilliant job expressing her pain and suffering throughout her work. Her work creeps up on you-stare too long and you will half expect the figures to start moving. She does not hide away from her experiences of heartbreak shown through her paintings. Unfortunately, her most interesting work has a no-photo rule. After viewing her paintings and sculptures, step into a room filled with mirrors and you will find a viewing box in the middle of the room. Take a glance in and you feel like you’re immersed inside a kaleidoscope. 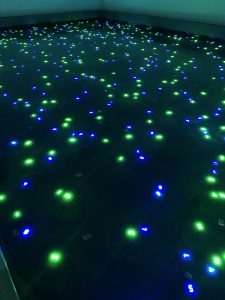 The exhibition then leads onto Tatsuo Miyajima’s Sea of Time, a dark room with the gentle sound of water and 3,000 LED lights numbered from 1 through 9 going black instead of reaching 0. Miyajima is known for his work surrounding the nuclear disasters in Hiroshima and Nagasaki, Sea of Time serves as a reminder of the Great East Japan Earthquake. Many people were involved in the placement of numerous LEDs.The constant changing of the numbers signify humanity, death and the way that time changes. 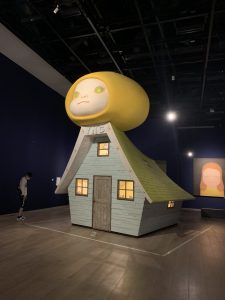 Continuing with the contrasting theme, the exhibition leads onto the work of Yoshimoto Nara. This artist mixes innocence and adulthood to a startling level. Walk amongst this exhibition and you will feel like a child again. The giant doll-like house makes you feel small and the artwork bears some resemblance to the baby sun character from Teletubbies. However, this work is far from innocent. Looking into the house, you see crushed cans of strong zero on the floor. The artist also starts off his exhibition with a collection of his favourite albums, most of which are far from being child-friendly. The work is also far from cute-though it does have that kawaii factor the old toys and teddy bears are . . . well . . . creepy.

In a society that views mental health negatively and has a high suicide rate, it would seem that for many this work is seen as thereputic for Japanese society and people worldwide.

The exhibition ends with Hiroshi Sugimoto. Like the entirety of the Stars exhibition, Sugimoto is not for everyone. The artist welcomes you to view his work and the surroundings of his photos similar to how we would view objects left behind by our ancestors. This, however, wasn’t for me. The artist brings your attention to how quickly life passes us by in a video of his garden project. In the video you can see him facing his mortality. However, this video had little impact on me as it cuts away every few seconds to a black subtitled screen which often came across as rambling. The rest of the exhibition only offers a few black and white photos of the sea and a polar bear. Though many widely celebrate his work, this one is a miss for me.

The Mori Art Museum did a fantastic job with the layout of the Stars exhibition. Although Japan has become famous in recent years for its anime and kawaii-style, Stars does a great job of reminding viewers of just how diverse Japanese art is. I saw a lot of suffering and trauma in the Stars exhibition. In a society that views mental health negatively and has a high suicide rate, it would seem that for many this work is seen as thereputic for Japanese society and people worldwide.Though Japan has grown to an extreme level, now being one of the economic powerhouses of Asia, the stars here have shown that Japan has not stopped growing.

The exhibition is on until January 2021 and is only ¥2,000. It is highly recommended for anyone who wants to explore the different perspectives of modern-day Japan that they have to offer.

Kayla is a second-year UK JET currently living in Tokyo. When she isn’t working she enjoys wandering through Tokyo and taking day-trips around Japan. When not exploring she can be seen cooking, digging into a good book and writing on her blog: https://passportsandcookbooks.com/